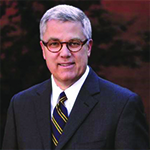 Alan Sears serves as Vice-Chairman of the ADF Foundation Board of Directors. He previously served as President of the Foundation, which was established by the Alliance Defending Freedom (ADF) Board of Directors as an independent entity to assist with and process planned and legacy gifts. Sears, the founding President and CEO served the ministry from July 1993 to 2019. During his tenure, the Lord enabled ADF to grow a dream into the largest religious civil liberties entity in the world, and according to Empirical SCOTUS, ADF was the most successful litigant at the U.S. Supreme Court during a five-year period (2013-2017). Sears’ media appearances include many television interviews and features including The Today Show, Nightline, CNN, Fox News, and Oprah. He has also been a guest on hundreds of radio programs and co-authored several books, most recently, The Soul of an American President: The Untold Story of Dwight D. Eisenhower’s Faith, co-authored with Craig Osten.