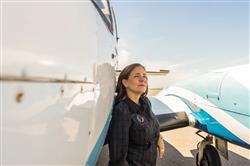 Teara traveled to Africa & while a passenger in a small airplane for the very first time, as she accelerated down the runway her ‘heart came to life’. She returned to Canada to fly her first solo flight a few months later. Within one year her Commercial Pilot’s Licence was in hand & she has been flying commercially since. Becoming a pilot was transformational, truly giving this young Indigenous woman wings. In 2010, she started KÎSIK Aerial Survey Inc. (KÎSIK is a Cree word for sky and eye). She built this business from the ground up with an amazing, inspiring, exceptional tribe. In 2016, she sold the business, handing over the controls for a new exciting chapter of excellence & growth. As the visionary of the Raven Institute she sees connected hearts, minds, & hands in a united & thriving nation. Rooted in Indigenous ways of knowing & being, Raven is contributing to the development of humans, organizational systems, & community. Teara holds a Master of Arts in Leadership degree from Royal Roads University, & is a Certified Executive Coach. The journey of learning now takes her back to Royal Roads as Associate Faculty in the Master of Arts in Leadership program & to Fielding University where she is studying in the Human Development Ph.D. program. Teara is a brave-hearted Iskwew warrior, an edgewalker, a dreamer, a disrupter, a mother, a leader, an entrepreneur, & a proud Métis bridge builder.