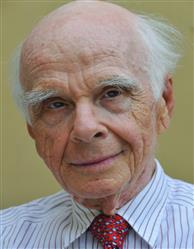 Ervin Laszlo, Ph.D. is a philosopher and systems scientist. Twice nominated for the Nobel Peace Prize, he has published more than 100 books and over 400 articles and research papers. He is Founder-Director of the Laszlo Institute of New Paradigm Research, Founder and President of The Club of Budapest, Fellow of the World Academy of Art and Science, Member of the Hungarian Academy of Science and of the International Academy of Philosophy of Science, Senator of the International Medici Academy, and Editor of the international periodical World Futures. He received a Doctorat d’Etat from Sorbonne (1970), and he holds Honorary Ph.D’s from the United States, Canada, Finland, and Hungary. Laszlo was nominated for the Nobel Peace Prize in 2004 and 2005, and he is the recipient of the Goi Peace Prize (2002), International Mandir of Peace Prize (2005), Conacreis Holistic Culture Prize (2009), Ethics Prize of Milan (2014), and Luxembourg World Peace Prize (2017). Websites: www.TheLaszloInstitute.com, www.ClubofBudapest.com, www.ErvinLaszloBooks.com