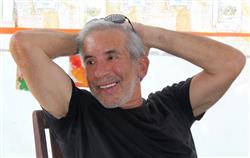 Dr. Michael Tobin has been a marital and family psychologist for 45 years. On his way to becoming a psychologist, he was a former US Army officer, glacier climber, marathon runner, and restauranteur. He also claims to be the first entrepreneur to introduce granola to Connecticut. His new book, Riding the Edge: A Love Song to Deborah which chronicles a six-month transformative journey in 1980 when Deborah, an Arab American, and Michael, an American Jew, bicycled across Europe, Lebanon, and Israel where they confronted the challenges of love, war, and identity. Riding the Edge was just honored with a Silver Award from the Non-Fiction Authors Association. He’s been with his life partner, soulmate, and wife, Deborah, for 47 years. They are the parents of four and the grandparents of 14. He is the founder of the award-winning website, www.wholefamily.com where you can find numerous articles about relationships.