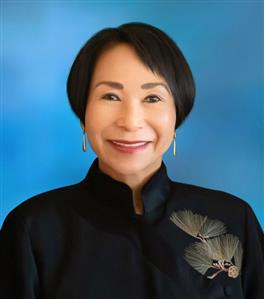 Audrey E. Kitagawa, J.D., is the President/Founder of the International Academy for Multicultural Cooperation, the President of the Light of Awareness International Spiritual Family, the Chair of the Antii-Racism Initiative and Co-Chair of the Gender Equality Working Group of the G20 Interfaith Forum, and the former Advisor to the Office of the Special Representative of the Secretary-General for Children and Armed Conflict at the United Nations. She is a United Nations Representative for the United Religions Initiative, an Ambassador of Religions for Peace International, and Chair Emerita of the NGO Committee on Spirituality, Values and Global Concerns, A Committee of the Conference of NGOs in Consultative Relationship with the United Nations. She has been enstooled into the royal family as the Nekoso Hemaa, (i.e. Queen Mother of Development), of Ajiyamanti in Ghana, West Africa, and has a school which she helped to build named after her in her African name, the Nana Ode Anyankobea Junior Secondary School. She wrote the chapter, Crossing World Views, The Power of Perspective in the Hawaii Japanese American Experience, which was published in a book about multiculturalism, communication and Asian women entitled, Learning In The Light. She is the recipient of the Spirit of the UN Award. She was conferred an Honorary Interfaith Minister degree by the New Seminary. https://www.multiculturalcooperation.net, www.lightofawareness.org