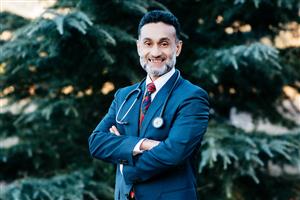 Dr. Mahsin Habib began his medical journey in 1988 as a student at the University of Sheffield Medical School in England. Upon graduating in 1993, he began working at the Department of Accident and Emergency at Good Hope Hospital and the Department of Psychiatry at Highcroft Hospital in the UK. Then in 1996, he left for the United States, accepting an externship in cardiology in Arizona and, shortly after that, an Internal Medicine Residency at Baystate Medical Center in Springfield, MA.?? Dr. Habib’s passion and determination for health and medicine began to evolve during his time in the US. In 2000 his residency ended, and he began to work on a different approach, integrating fitness and nutrition into his professional practice. And in 2001, he founded Next Health, the first medical clinic to offer fitness, nutrition, and medical services under one roof. A few years later, he incorporated a weight loss program into the clinic’s offerings, and in 2006 he officially began practicing integrative medicine.? Always seeking to innovate by leveraging the newest technologies and perspectives, he began offering a Food Inflammation Test (FIT) and Advanced Cardiac Test, as well as many other cutting-edge tools and techniques for his patients. This innovative spirit was, and is, buoyed by his sincere desire for healing by focusing on the root causes of disease. And his imagination fuels an irresistible aspiration that most doctors are not even aware of.